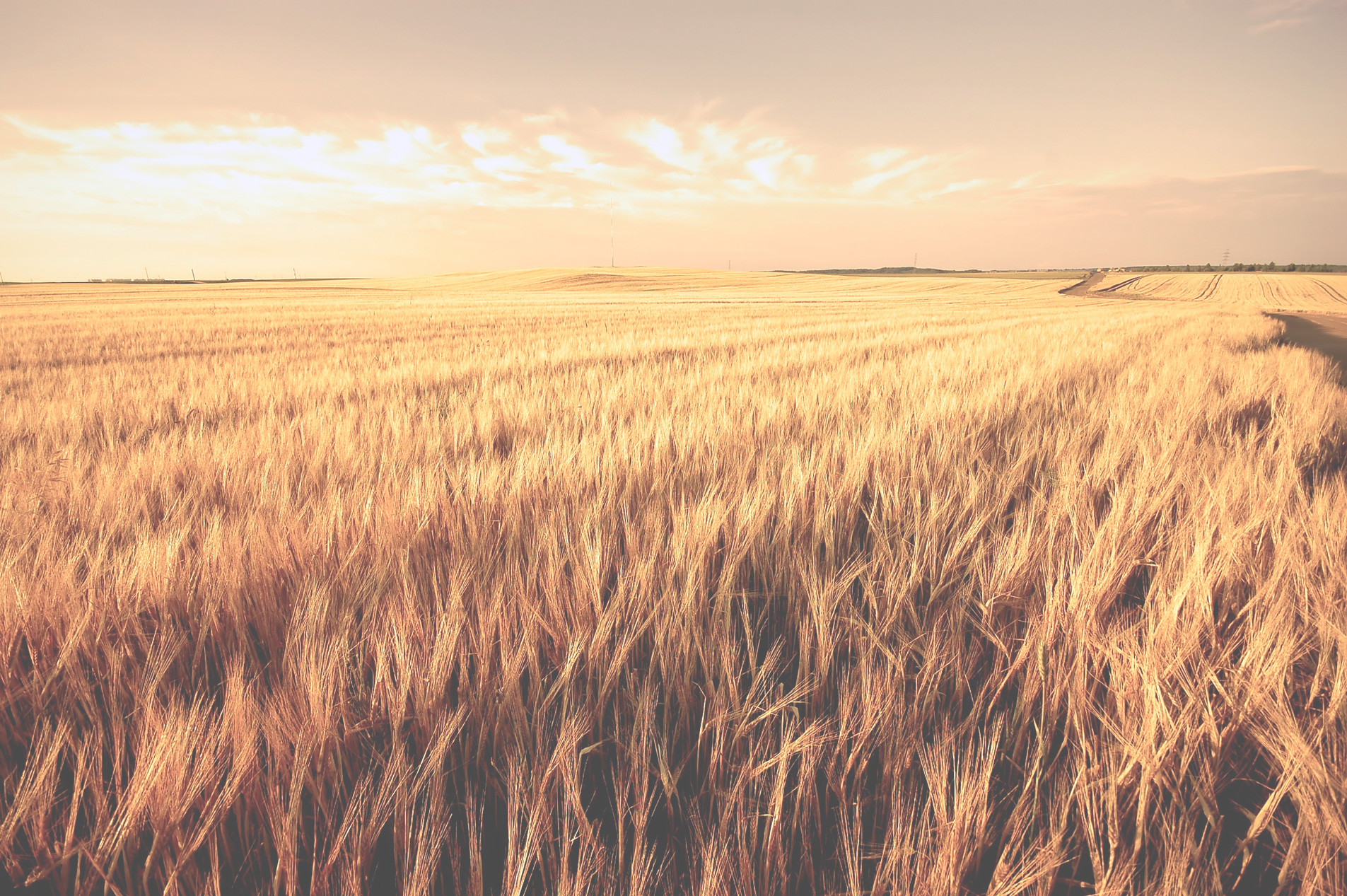 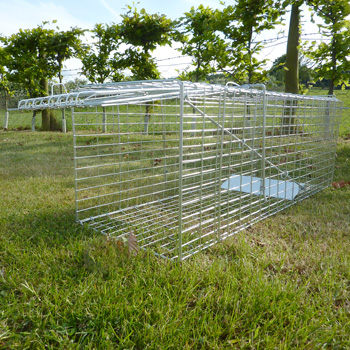 If the rabbit, squirrel or rodent population around your property is a problem then you need another method besides fencing. Our humane traps are the alternative choice which avoid poisons and allow the removal of the pest in a much more humane way. They are manufactured from galvanised mesh, giving them a long life and can be used outdoors or indoors. Carrier handles are on the top with hand-plates for your protection for easy transportation and safety when removing the animal. Releasing trapped pests back into the wild leaves you with a peaceful mind knowing that you have not had to resort to more unsavoury methods or any unnecessary suffering.
In the UK it is an offense not to check on the trap at least once per day 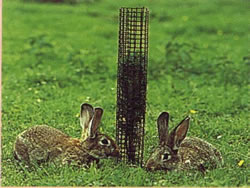 Rabbits can be a delight to see in your garden. They may appear cute when they first appear, but rest assured they are looking for something to eat. Soon you will have to take action if you want to stop them from destroying your plants and landscape. Rabbits are nocturnal and will feed on just about any plant they are able to reach. Succulent bedding plants, just about any garden vegetable or fruit and several ground cover species of shrub are all targets for hungry grazing rabbits. Since they strike at night, rabbits may go unnoticed for weeks until eventually, the gardener may notice plants are simply disappearing or dying.  As they eat randomly, instead of ingesting the entire plant, they may chew the flower or half the plant before moving on to the next maximizing the damage
Locating  and baiting the rabbit trap
The best bait to add to the trap is the food which the animal is eating. Take cuttings from the plant or flower from which it has been feeding and place a trail leading to the trap. Freshly cut carrots are also tempting. Place more inside at the very back of the cage. This must be replaced and kept fresh but the bate outside must not. Site the trap where you are experiencing the activity and you will be able to live catch the pest. You may catch it quicker by placing some short fencing around the desired plant at night when you first set the trap. The fence will force the rabbit to enter the trap faster as it will not have access its chosen plant.  The trap must be checked often at least once per day.
If placing traps in fields it is best to site them where the damage is occurring this is usually opposite the rabbit burrows.
It is important to site the traps 1 to 2 metres away from the site of the damage in a straight line about 6 meters apart. Normally it is advisable to use approximately half as many cages as rabbits seen grazing at any one time.

Grey squirrels- rather like rabbits are either a loved or hated visitor to our gardens. While some people enjoy seeing and feeding them most will agree they can become quite a nuisance. They soon learn how to raid your bird table and then to make things worse dig holes in the lawn to hide the food they have stolen. Birds visiting for nuts and seeds are frightened away. They have also now become a serious forestry pest, causing serious damage to young trees in particular.
Sometimes they find their way into roof spaces either by climbing walls or jumping from a nearby tree. Once there they can become very destructive, chewing timbers or using your insulation for nesting material. They have also been known to strip the insulation off electric cables causing a major potential fire risk
If you suffer from any of these things then our live capture squirrel traps are the answer.
Locating  and baiting the squirrel trap
By watching the squirrel you can see where he comes from and at what time during the day. Normally he will venture in search of food first thing in the morning. When you know where he is coming from site your squirrel trap near there or where he has become a problem. It is best sited in an area away from frequent human activity. Simply bait the cage with some of the squirrel's favorite food bird feed, peanuts and peanut butter are a good choice.
Once the trap has been put into position it is best left for at least seven days before re-siting.

Rats are a serious danger to health as they spread many diseases and parasites particularly through their urine and droppings. They can also do structural damage on a large scale through their gnawing especially to electrical cables and woodwork. Food for human consumption is often eaten or damaged or left inedible. Evicting an established infestation can be a major problem for a householder so preventative measures are a sensible solution before things get out of hand.
Why choose a humane rodent trap you might ask rather than poison or other methods. Well you know how many rats you have caught and they don’t go away and die in agony from the poison. If you have resorted to poisoning before I am sure you will have seen dead rats lying around decomposing or not be aware of other animals who have suffered from eating them.
Locating  and baiting the rodent trap
You will know if you have problems with rats when you can see signs of damage caused by gnawing, holes and droppings. Often you will see holes made in doors or walls which can be entrances to their nests in the cavities. The amount of droppings that can be seen is an indication of how serious the infestation is and how long they have been there. Site the trap near to where the problem is and remove all other sources of food from the area.  A suitable bait could be grain, bird food, do food, meat or cheese. Rats can be difficult to catch with only one trap as it is sometimes hard to tell the best locations to set the traps especially in lofts. Using a lot of traps helps you hedge your bets by covering all of the most likely locations.

Why our traps are the best available on the market.

Repair of damage caused by rats, rabbits and squirrels may be required. Also it is advisable to take further preventative measures by excluding any further access to the property. It is recommended that welded mesh or rabbit netting is put around the base of wooden out buildings, sheds etc.

1. Unpack trap carefully as it will spring open. Bait the trap behind plate.

2. Close the back and hold in place using the chain. 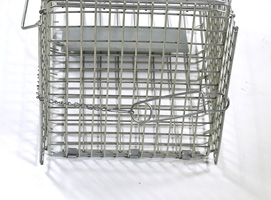 3. Pull down metal bar to keep the trap rigid. 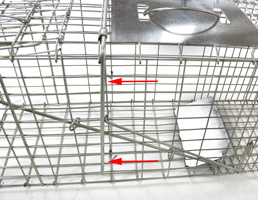 4. Lift top bracket and pull open door then hook spring into place, which will lift the plate and set the trap. 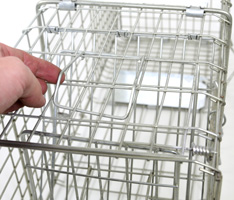 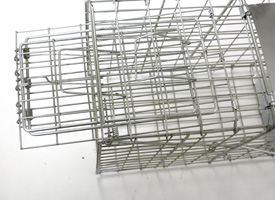 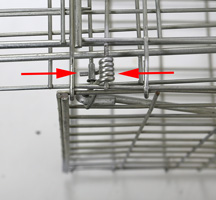